Again, blog post by Jamie and captions by Jen!

The remainder of our stay in Bordeaux was very enjoyable, although the weather was pretty dreary, drizzling almost constantly, the kind of annoying rain which doesn't really stop you from going outside but which leaves everything slightly soggy and cold.

On the food front, although we very much enjoyed the rich French meals, by dinner time on Wednesday, neither Jen or I could stomach any more of it, so we randomly decided to eat at a Brazilian restaurant we encountered. This turned out to be fantastic, especially the desserts! We'll be looking out for a Brazilian restaurant when we return home.

On Thursday morning, we visited Bordeaux's cathedral, which is huge! We happened to visit as the organist was practising on the pipe organ, which was a real treat. I love the sound of a true pipe organ, but rarely get to hear one live. I also got to touch some of the big angel statues, which was rather interesting.

A poorly lit photo of Jamie checking out the angel.

I often have trouble figuring out what statues (or parts of them) are meant to be representing, but these were large enough and carved with so much detail that I could grasp them quite easily.

The overnight train ride to Venice was certainly a mixed experience. First of all, the train was running late due to bad weather conditions; we ended up arriving in Venice about two hours later than intended. We had a private sleeper cabin. The worst part was the food. The only food available (or at least as far as we were led to believe) was in the restaurant carriage. Dinner cost Eur28 per Person. Major rip off! First of all, we were both tired and the train was already running late, which meant that dinner didn't start until 9:30pm. There was only one (very curt) person serving the entire (rather full) carriage. We were given some very stale bread, which no one ate; Jen saw lots of pieces of bread with tiny nibbles taken out of them, similar to our own. The food was very average (and that's probably being kind) and service was hideously slow; we didn't get out of there until after 11, and even then, we left before dessert (pre-packaged chocolate cake) was served. Breakfast was Eur9.50 per person and was similarly crap. Airline food service receives its fair share of complaints, but this was far worse.

We returned to our cabin after dinner to discover that it had been locked while we were away, so we had to find someone to unlock it. The beds were comfortable enough and both of us did manage to get a few hours of disjointed sleep, although the ride was pretty jerky. Just being able to lie down and rest made it far better than a plane trip for me and it was fantastic to have privacy.

Upon arriving in Venice, we took a water taxi to our hotel. 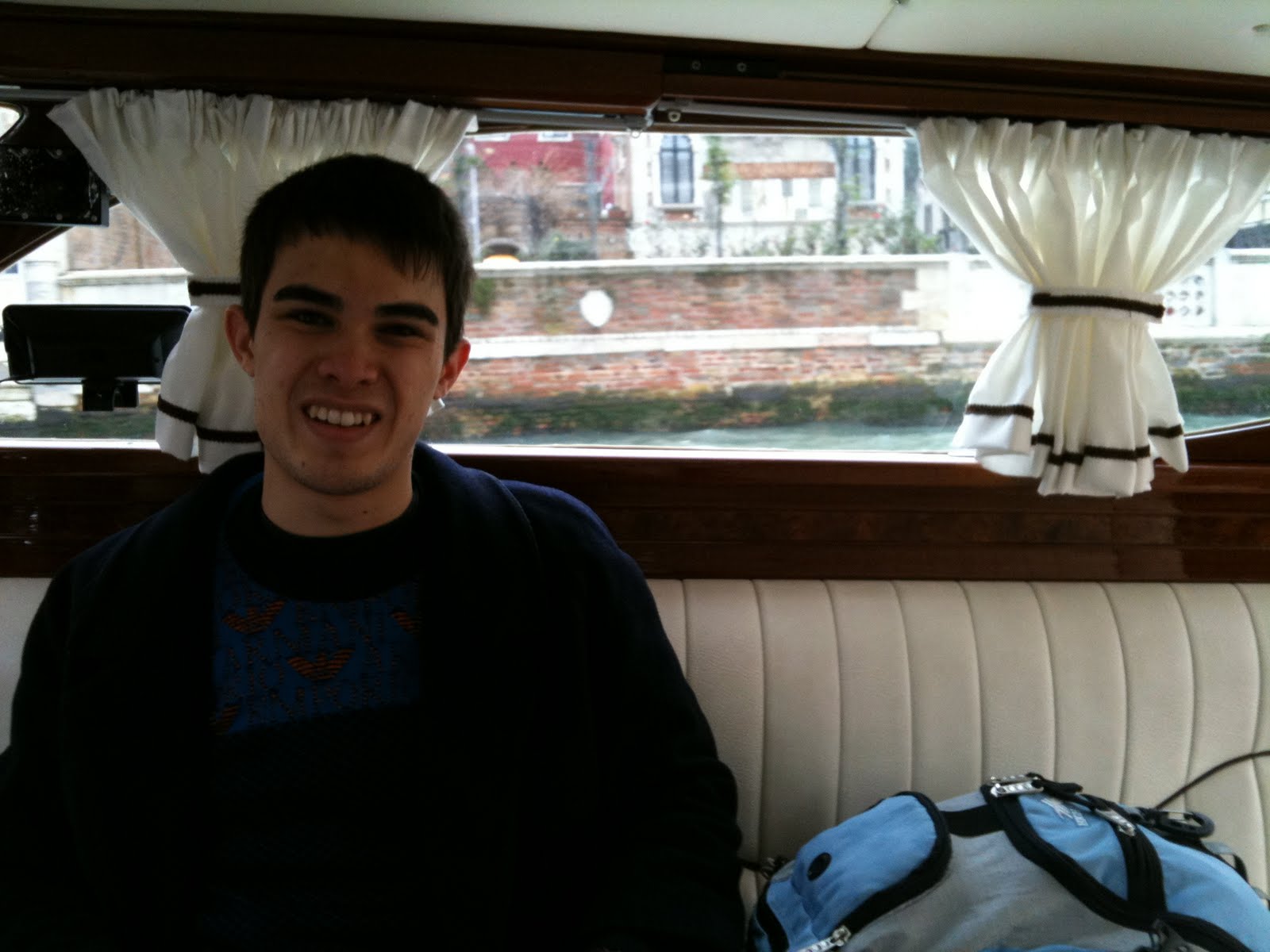 Much more interesting than a regular taxi!
I knew Venice would be fascinating for me and I wasn't disappointed. The whole concept of a city (or at least a large section of it) where non-pedestrian travel occurs in the water instead of on land is just so different to anything I've experienced. Also, the constant, gentle lapping of the water is quite relaxing. Our hotel is in a terrific location, just metres away from the water and the Rialto Bridge and walking distance from everything we want. 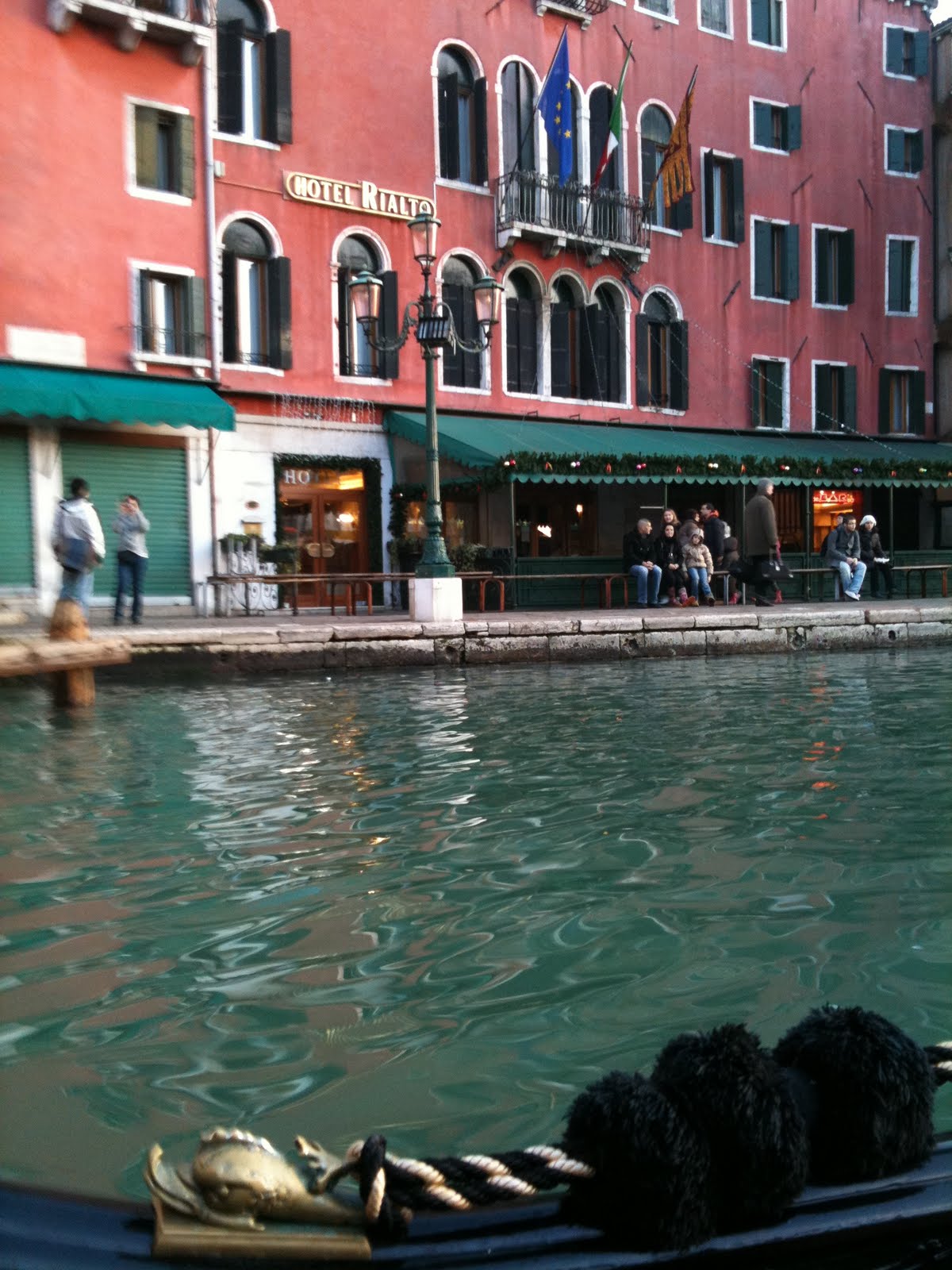 Our hotel.
The room is quite old-looking, quaint and (according to Jen) "girly", with patterned fabric on the walls, an old-style key and other similar cuteness. 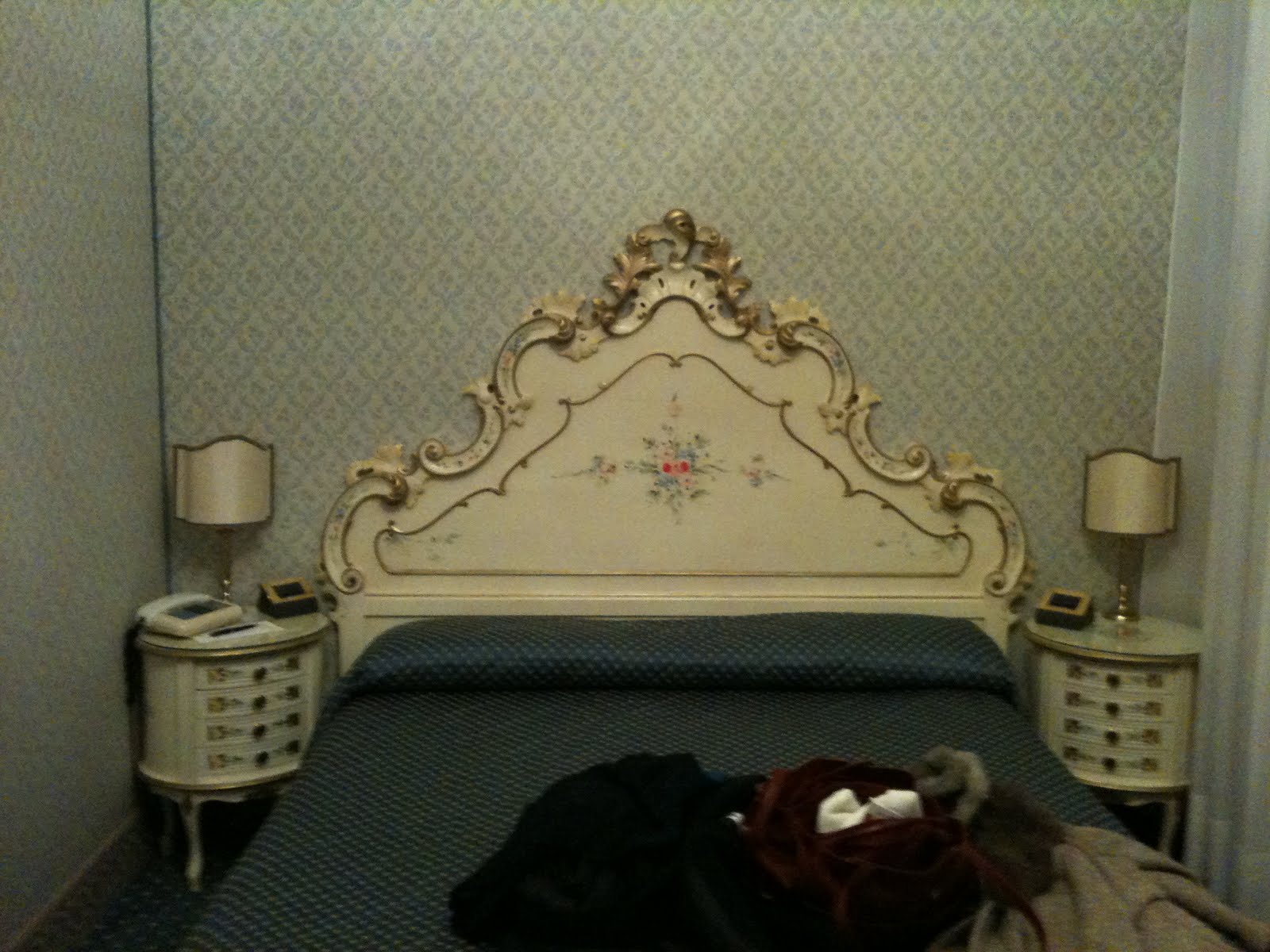 As usual, we started our stay with a fantastic, luxuriously lingering meal. :)

One more thing: just after we arrived in Venice, the following (slightly paraphrased) conversation occurred:
Jen: (excitedly) "Oo! China Town!"
Jamie: "Err... we've just arrived in Italy and you're excited about Chinese food?"
Jen: "Yeah, it's because I'm a Teh now..."